I'm getting sooooooooo bleeping tired of ppl abusing the "Pareto Principle" which you have undoubtedly heard at one time or another as the "80-20 Rule," probably another reason why I dislike Tyler Perry, I digress. Vilfredo Pareto was an Italian economist (I don't remember when, look it up on your own or the companies dime on wiki) who did a study that revealed that 80% of the wealth in his town, most of Italy and many others places was controlled by 20% of the population, leaving 20% of the wealth to be dispersed and fought over amongst 80% of the population (today its like 1% controlling 99% of the worlds wealth; sad I know). It doesn't stop there. In government and any organization, 20% of the ppl make 80% of the decision. On a team or a company, 20% of them will produce 80% of the value and worth (this is why one company will pay some ppl a few million and while a few million get laid off). Applied to a contemporary context, I'd say 80% of your emails are trivial (even more for me if you knew my friends), you talk to 20% of your addressbook 80% of the time. You wear 20% of your wardrobe 80% of the time. See where else this applies in your world. Have at it, take it to town.

The theory in the movie "Why did I get married" states that if you find a man/woman who has 80% of what you're looking for with 20% missing, you should neglect or stomach the 20% and focus on the 80. So based on Pareto's principle, he's telling you to be sheep and not shepherd and to quote one of my favorite thinkers of all time, Thomas Jefferson, "the masses or asses" (hence the inception of the electoral college...I forgot how much I loved history.I digress). So when he tells his woman "baby, you're my 80," Paretoeanly speaking (jus made that one up muhself) he basically calls her trivial.

Perry missed the entire point in its entirety, ENTIRELY. The point is the critical few versus the trivial MANY. The point is that the 20 percent, even though seemingly inconsequential in number, is more valuable and critical than the overwhelming 80, hence why its referred to as the vital few vs. the trivial many, or "Pareto efficiency." You're SUPPOSED to spend 20% of your time on the trivial 80 and 80% of your time/energy/money/effort on the 20% which will yield you 80% of you total value (hope I'm not losing anyone). I used to teach this in my time management and leadership trainings so I was wondering why in every conversation on relationships, ppl keep quoting this...erroneously.........and citing Tylyer Perry? That's like saying The RrChitect's first law of thermodynamics is energy is created and destroyed!! Like Sir Issac Newton never existed. And even worse, I have legions of ppl ignorantly quoting me on that like its the gospel.

If I hear one more person telling me that they are going to stay in some seriously effed up relationship bc of a few good things, I'm going to scream. If you're not happy, you're not happy, PERIOD!!! It's like a single negligible drop of water that if ignored and continued dripping over time will collapse an entire building (our second physics lesson for the day is on pressure over time: F=MA M'Fa's!!). Some things are petty and resolvable but some things are just irreparable. It kills me bc with so many good ppl not getting a chance for trivial reasons, you have these flying camel turds who getting away with murder and their man/woman won't leave them.

Sidenote: I'm not sure what's worse. Me making physics jokes or the one or two other nerds who are rolling on the floor laughing at them right now. I'm a closet nerd. SHHHHHH!

So whats the take away after all my complaining? Good question little Timmy, I'm glad you asked. If you have an 80-20 situation, first of all, slap the first person who quotes Tyler Perry (hell, even Steve Harvey has better relationship advice). Secondly, please take the history lesson and correct anyone you hear quoting this erroneously and stop using it. I understand it makes for mellow dramatic soppy crap, but if you're going to quote a reputable theory, citation please, and get it right. Perry should have just changed it all together so call it the 70-30, 90-10, 9-1 rule or something, and make it your own. Finally, ask yourself, is it a TRIVIAL 20 or a VITAL 20 and that, my friends, will tell you exactly what you need to do. Too many ppl are ending relationships over a trivial 20, and even more are sustaining despite a vital 20. I don't know about you, but if I heard that the pilot CRASHED 20% of the time and landed 80%, I'd forfeit my seat for the next stand by.

Sidenote: Nerd Moment #2 - If something is TRIVIAL, all it takes is the removing one or two of the RIght elements, and you can reprioritize it into something VITAL...............

Email ThisBlogThis!Share to TwitterShare to FacebookShare to Pinterest
Labels: Commentary, MESSAGE, movie review, relationships, Tyler Perry, Why Did I Get Married

But dude, what if he wasn't trying to go down the whole route of history? what if he was trying to come up with something new and just used an old "saying"? I mean I understand what he's saying and you're basically saying the same just with a different label, but in the movie he was just saying that a man shouldn't settle for that 20 because that's what the woman is when he cheats...a 20. You also gotta remember, he's doing this for the masses...and we all know no everyone looks at things from an intelligent point of view (that's also why he got away with it lol) but thank you for the very important and very interesting history lesson. definitely goes into my book of lifetime wisdom and facts. ^_^

I actually read yout blog bc I JUST got done watching the Boondocks spoof on Tyler Perry and wondered if you commented on him. Good point. Not a fan of the "Why did I get married" movies. I barely even remembered him using the 80/20 rule I became so familiar with in my business courses. I just cant pay him any mind in those two terrible movies. 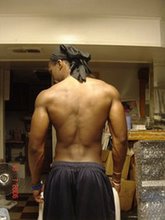 R
"I think, therefor I am" - Descartes. I don't think of what to write, I write of what I think. The premise of this blog is a simple belief; if I think something is interesting, there has to be at least one other person out there that will too. Will you? rrchitect@gmail.com